Imagine a sealed box containing a cat, a bottle of poison and a radioactive sample. The box is rigged, so once the sample has decayed, the bottle shatters, which kills the cat. Opening the box will allow us to detect if this has happened yet or not, but what about when the box is still sealed? According to the model Schrödinger was trying to disprove, the cat would be both alive and dead at the same time! Since that is obviously impossible, that model cannot be true. QED.


Now what remains true, and what undergirds the entire thought experiment, is that until we open the box, we don’t know if our furry feline friend is alive or dead. This is a perfect analogy for two different problems MDHA has been working on for the last two years.


In early 2015, MDHA told the community, that regarding the number of unsheltered homeless persons counted in the annual homeless count, we had this type of Schrödinger’s Cat problem. We knew there were unsheltered homeless, and we were counting them every year, but we could not be confident we were finding everyone that could be found. We had what was, at least partially, a sealed box.


We needed to improve our count methodology, and we needed more volunteers. We explained that the experiences of other communities showed that you needed a ratio of 1:1, i.e. one volunteer per one unsheltered person, to find and count everyone.  We suggested that likely there were about 1,000 unsheltered persons in our jurisdiction, and .


Indeed, in 2016, in our first count conducted under our new counting regime, we had about 750 volunteers, and we found about 750 unsheltered homeless persons. (In 2015 we had found only about half as many.) We still were not able to cover all the routes we had carefully plotted in 2016, so we continued to suspect that we were not finding everyone who could be found.


In 2017, we set our target at 1,000 volunteers, and we ended up with about 1,375. We covered 99.5% of our routes, and we found 1,087 unsheltered persons. The box was unsealed, the cat was fully in view, and our two-year-old prediction had proven true. This is why in the 2017 State of we suggested that this number be the benchmark for our work moving forward.


There was one more Schrödinger’s Cat problem we pointed out in early 2015. Communities in the are required under Federal Law to maintain Homeless Management Information Systems, commonly known as HMIS. Organizations like MDHA are tasked with operating these systems. Most organizations receiving Federal funding for housing programs for the homeless are required to report crucial data into these systems. This is not an issue of bureaucratic compliance. The only way we can and do help individual organizations and the community at large improve in our fight against homelessness is through collecting this data, analyzing it, and using it to drive improvement.


The problem was that in early 2015, only 3%(!) of the shelter beds available to ’ homeless population were reported into the system. The data reported into the system from Federally funded housing programs is tremendously valuable, but it is data about the “back-end” of a person’s journey from homelessness to housing. The shelter environment is the “front-end” of homelessness, and we had very little data about it. It was more analogous to Schrödinger’s Cat, than the annual count ever was. In this regard, the cat was 97% sealed within the box.
During the last State of the Homeless Address, we had the audience go through our own thought experiment to drive this point home. We asked everyone to stand up to represent 100% of the homeless population. Then we gradually had sections of the audience sit down, leaving only a small section standing. We explained that we could not possibly, with a straight face, contend that the data we collect about the small section standing, was representative of the entire audience.


Already back in 2015, we stated that one of the most important things needed to do was move from 11(!) separate data systems to a single open state-of-the-art HMIS system, with at least 86% of shelter beds reported into it. The Federal Government does not really consider data from a system that does not have, at least 50%, to have any meaningful validity. Only at 86% does it consider the data to be comprehensive and reliable enough to award the community points on its collective grant application for homeless housing programs. The Federal Government cut the funding for homeless housing programs in twice over the last few years, because of this very problem. That cut did not affect the shelters; it affected the housing programs. 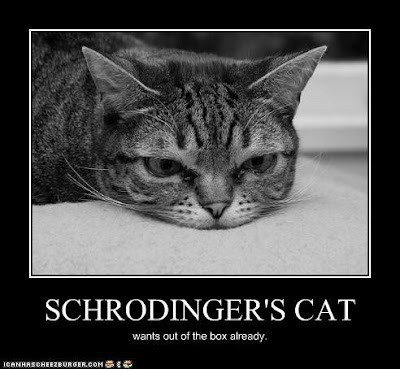 We have been working on this problem for the last two years, early on partnering with PCCI and now Pieces Tech to develop that single open state-of-the-art HMIS for Dallas. In the meantime, we have increased the number of shelter beds reported into HMIS from 3% almost eleven-fold, but that is still just 32%. We are excited to be on the cusp of transitioning to the Pieces Tech HMIS, and even more excited that more service providers will be signing on to be a part of it. We are determined, this year, 2017, to break that 86% mark, and finally bid Schrödinger’s Cat adieu. We owe our homeless neighbors nothing less.


* MDHA wishes to assure readers that no cats were harmed during the writing of this blog post, though one rabbit gave me a dirty look.
Posted by Unknown at 9:13 AM No comments:

In the opening scene of Top Gun, we are introduced to the hero of the movie, known by the call sign Maverick, as he accomplishes an incredible feat, trolling an enemy pilot:

It is so quick, that it is difficult to see how Maverick did this. So, how did he?


“When two pilots faced off in a dogfight, the pilot who was able to observe the variables, orient his aircraft to the best possible position relative to his opponent, decide on the best course of action to engage his opponent, and act rapidly on that decision would win the fight.” (Mark Bonchek and Chris Fussell, Decision Making, Top Gun Style; Emphases mine – DSG.)


What the fictional Maverick uses is a conceptual decision making framework originated by the real larger than life character, U.S. Air Force Colonel John Boyd. This framework is known as the OODA Loop, because, as illustrated by Maverick, it involves four steps, Observe, Orient, Decide, Act. Boyd believed that this framework could be useful beyond the military, and it is seen as particularly helpful in competition in the business world. I believe, that it is applicable to our fight to end homelessness, too.


You can probably reflect on different situations, where you have engaged in decision making, and have used some or all the elements Maverick used. The extent to which you have been successful may have depended on your adherence to the OODA Loop framework.


You could, for instance, observe carefully, orient yourself to your situation very well, and even decide on the right course of action, but then due to various obstacles, not act. Conversely, my father’s admonition from when I was a child, still echoes in my head. To my pleading, “But I thought,” he would respond, “No, you didn’t think!” In those cases, I decided and then acted, without observing and orienting.


So, how does this apply to ending homelessness? If you think about our new MDHA Homeless Response System Community Dashboard, it gives us the perfect tool to make decisions in a way that would make Colonel Boyd proud. It allows us to observe all of the performance metrics or variables related to our number one job, as a homeless response system, housing the homeless. We can then orient ourselves into the best possible position, by drilling down into the data, and addressing three simple questions: 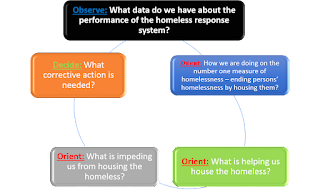 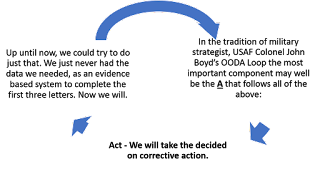 That the most important component in the real world is action, is a given. However, it is the Dashboard that allows our action to be much more well informed than ever before, and that is the true game-changer. The Dashboard allows our action to be guided by genuine data-driven evidence-informed decisions, born of careful observation and orientation.  With that, we can win this dogfight and defeat our foe, homelessness in and .
Posted by Unknown at 4:45 PM No comments:

Watch the State of the Homeless Address 2017!

On Thursday, March 9, 2017, about 350 people joined us at Goodwill Industries of Dallas, for the State of the Homeless Address.


We were honored to hear introductory words from MDHA board member, Dallas County Commissioner, Dr. Theresa Daniel, and Chair of the MDHA board, Executive Director of the , John Castaneda.

Cindy J. Crain, MDHA President and CEO, shared the results of the 2017 Point-in-Time Homeless Count, and the progress of the Homeless Response System.

Posted by Unknown at 9:59 AM No comments: