, – This Thursday night, January 25, 2018, 7pm-Midnight, the Metro Dallas Homeless Alliance (MDHA), and its partners in and will conduct the annual federally required Homeless Count, and for the third year in a row, the homeless response system’s backbone organization will be breaking records. 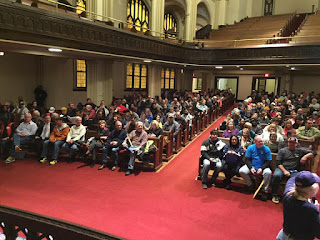 Volunteers prepare for the Homeless Count on the night of January 26, 2017
“We are still compiling final numbers, but as of Tuesday morning, we are looking at about 1,550 registered volunteers in Dallas and Collin Counties, who will fan out across over 250 different routes, to count our homeless friends,” said David Gruber, MDHA Development and Communications Director. In 2017, MDHA and its partners conducted the largest homeless count in history, to date, with an estimated 1,300 volunteers in both counties. That year, volunteers found 1,087 unsheltered persons, out of a total of 3,789 persons experiencing homelessness that night. (The remaining 2,702 persons were in shelter, safe haven or transitional housing.)
MDHA leveraged its relationship with its many service providers, funders and supporters, in a recruitment effort that began in late November, and ended Monday. Notably, United Way of Metropolitan Dallas, an MDHA funder, lent their hand to the recruitment effort, and even launched a campaign to give every person experiencing homelessness in and a new pair of socks the week of the count. “We are tremendously thankful to everyone who helped us spread the word, and organize this year’s count. We could not have done this alone,” said Rebecca Cox, MDHA’s Vice President, who is spearheading the Count, “It is quite humbling.”

MDHA radically changed the way it counts the homeless in 2016. It began recruiting more volunteers than before, and utilizing them to count the unsheltered homeless, exclusively. Shelters, in turn, provide an accurate count of their guests, electronically. “By recruiting more volunteers, and focusing their efforts on counting the unsheltered, we can canvas more areas, and improve the accuracy of the count,” said MDHA President and CEO, Cindy J. Crain. Impressed with the record breaking recruitment in the 2016 and 2017 counts, the National Alliance to End Homelessness invited Crain to present about homeless count volunteer recruitment, at their recent annual conference in July 2017.

Technology plays a part in improving accuracy too, as well as making for a smoother volunteer experience. Since 2016, MDHA has utilized geographic information system (GIS) mapping software to plan volunteer routes, as well as tier them, according to the likelihood of the presence of homeless persons in any given area. And, beginning in 2017, in place of paper surveys printed out on double-sided legal-size pages, MDHA began using the Counting Us app from Simtech Solutions. The app eliminates the need for volunteers to return to their deployment sites to drop off completed surveys, as well as the need for more volunteers to transcribe hundreds of surveys in the weeks following the Count. Instead the app uploads each survey immediately. It also allows MDHA to gather data more accurately, and better analyze the results after the Count.

Use of the app can also help MDHA and its partners connect persons experiencing homelessness to services. The app automatically records the exact latitude and longitude, of each person counted, using GPS. Then, the night of the count MDHA can supply outreach teams with this information, so they can go out the very next morning to assist individuals who may qualify for specific programs, including youth, veterans and persons with specific medical diagnoses. 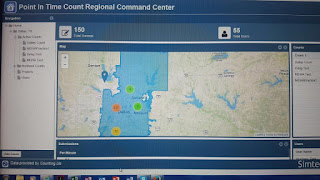 Dallas Counting Us command center – January 26, 2017
Thursday night, volunteers will gather at First United Methodist Church Dallas and Wilshire Baptist Church, as well other sites throughout and to check in and receive their routes, as well as receive final training and instructions, before they fan out across the two counties. Meanwhile, MDHA will monitor the data as it is being gathered in real-time, in a virtual command center. MDHA will share the results of the Count, with the community, at its annual State of the Homeless Address, on March 21, 2018, at 9:30am, at Goodwill Industries of Dallas.
Posted by Unknown at 5:12 PM 1 comment: